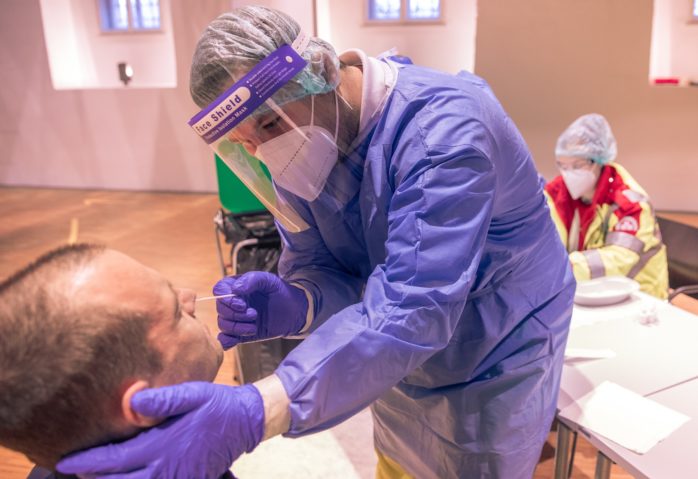 My son and mother were infected with coronavirus or one of its variants during the Christmas of 2021 after their PCR tests yielded the dreaded positive results.

Because they had been vaccinated and received their booster shots, their symptoms — fatigue, sore throat, runny nose and headache — were manageable with over-the-counter medications, and hospitalization was never even a thought.

My boyfriend, Lewis, and I — also vaccinated and boosted — bypassed the contagion in spite of the holiday meals, gift exchanges, embraces and lengthy conversations we all shared.

Before making these discoveries, I joined the millions of Americans searching for testing facilities as the number of cases surged largely due to the fast-spreading, highly contagious omicron variant as well as the deadly delta variant.

This column explains how I scheduled PCR tests for my son, Joseph, and my mother and my experiences with them at these testing locations in Pennsylvania. In addition, I’ll share my experience being administered the test in Maryland.

I hope this information can assist you, my dear reader, as you contend with symptoms, fears and anxiety over the virus and its impact on the daily lives of you and your children.

How to schedule a PCR test

Scheduling a test was easier than the more involved process for scheduling the vaccine in Pennsylvania.

Instead of visiting designated retail pharmacies and test collection sites online only to discover that appointments were unavailable, I decided to see if WellSpan handled PCR testing. WellSpan is the dominant health system in south-central Pennsylvania with thousands of medical professionals and numerous centers and services.

I signed into the account on the MyWellSpan portal that I share with my son, Joseph, and switched to his individual profile for which I am a proxy.

I scrolled down the page and discovered the option for COVID-19 Test Collection Sites and clicked on it. 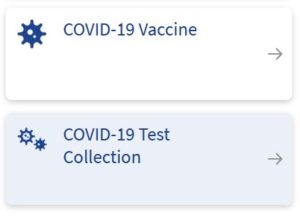 I was asked to select from the county or counties where I would prefer to be tested.

If an appointment for a test could not be made in a given county, the user would be directed to locations where testing was offered — and waiting in long lines likely.

For those counties where appointments are being accepted, the user would be taken to this webpage where they could click on a date and time. I made my selection for the purposes of this column.

After I scheduled the appointment, I was asked to verify and click the Schedule button.

The announcement of my scheduled appointment was posted above WellSpan’s request that I click on the Confirm button and go through a brief e-Checkin process to confirm my personal information.

If I had decided to Cancel or Reschedule my test, options for me to click were posted below my testing information.

Selecting a testing site and scheduling an appointment for Joseph and my mother took a total of less than five minutes compared to the hours — even days — of searching my friends experienced during the 2021 holiday season in December.

Swabbed in less than 20 minutes

Throughout the United States in December 2021, several designated testing had lines of cars or people waiting to be tested for the coronavirus.

At the testing site in south-central Pennsylvania where my son’s and mother’s appointments were scheduled on two separate days, nearly 100 people each visit stood outside in one of three or four lines, all of which terminated at the building’s double doors.

Layered in coats, scarves, gloves and hats, adults and children waited fairly quietly in temperatures that were below freezing. As individuals were admitted one at a time into the building, the people in line slowly shuffled forward, a cold, hard sidewalk beneath their feet, an occasional wind sweeping past or through them.

On our drive to the testing center, Joseph and I discussed the surprising number of open appointment slots that day. He was the first family member to present symptoms and the first one tested.

We were optimistic that he would be tested quickly — until we pulled into the shopping center where the facility was located to the large number of people queuing up to be tested.

As we slowly drove past the entrance on our way to find a parking space in the crowded lot, I saw a nurse with blue scrubs peeking out from the bottom of her brown winter coat. She opened the door, spoke to the next person in line, admit them and quickly closed it behind her. Other times, she walked briskly past the people in line, occasionally speaking with them.

Before leaving my car, I found my appointment in an email on my phone. I instructed Joseph to get in line as I headed to the door where I got the nurse’s attention and informed her that my son had an appointment for his test.

She gave a small sigh of relief and told me we could go inside and be checked in. I called to Joseph who stepped out of his place in line and quickly walked to the door.

Not even 20 minutes later, Joseph and I were back in my car and leaving the shopping center. Once Joseph was checked in, we were sent to a room with around 15 chairs generously spaced apart. Three nurses sat at separate tables where they confirmed the person’s identity before swabbing their nose.

A similar experience occurred when I took my mother to that same facility a week later, except that a police officer in a police car was stationed at the entrance. Perhaps to keep the order? I couldn’t find any reports to explain their presence there.

Joseph’s test results were posted in less than 24 hours and my mother’s results, in around 72 hours.

Swabbed in more than 75 minutes

Instead of getting tested through WellSpan once my son was found to be positive with coronavirus, I decided to pursue testing at a Maryland facility that promised PCR test results in less than 12 hours.

How could I pass up this opportunity?

My boyfriend, Lewis, set up the appointment for him and me at 11 a.m. the following day. I couldn’t believe how fortunate we were to not only be tested but to be given our results so quickly.

After driving through the country on winding roads — wondering if my GPS was taking me to an actual destination or sadistically tormenting me with an annoying drive to nowhere — I arrived to find a long line of cars that curled behind the testing center’s building. The line was about a quarter of a mile long — at least, the last time I looked that day.

Because I had an appointment, I walked up to one of the center’s employees and told him that I was scheduled to be tested at 11 a.m.

Apparently, everyone in line that day was expected to be at the facility at 11 a.m.

So, for more than an hour, Lewis and I sat in our respective vehicles that crept forward after a test was taken and the vehicle pulled away.

I was so thankful that the facility had organized drive-thru testing rather than requiring everyone to stand outside and wait.

My car was warm, and I was dry as I passed the time waiting for my turn.

When I finally arrived at the front of the line, a nurse swabbed my nose. I had never been tested for the coronavirus and was concerned that I would swab my nose incorrectly.

How we are now

Since Christmas, my employer has allowed us to work remotely to prevent the spread of the virus. Reports that several staff members have been ill made this decision ever the wiser. No date has been set for our return, but we hope to return in a hybrid capacity in February 2022.

In the meantime, my son has returned to in-school instruction after having virtual classes during the first week of 2022. His school community had experienced a substantial uptick in infections and officials believed exercising caution was the best approach.

Lewis continues teaching in his small classroom, wearing a mask for eight hours a day.

My mother feels well after experiencing some minor symptoms and is excited to run errands and see her friends.

We attribute our mild response to the virus and our ability to stave it off to our vaccines and booster shots.

Truly, the best decision we ever made!

Cheers to another year together!

Leave a Reply to this site Cancel reply