Perspectives from Turkey, France, Japan, Australia, the US, China and India

Domestic violence is among the top reasons for women choosing single motherhood worldwide. Tragically, many single mothers are maimed — crippled from bullet wounds and stabbings and scarred from acid or chemical attacks — or simply killed by their spouse or partner. In Turkey, men murdered 440 women this past year, according to unofficial data from the World Health Organization, a United Nations agency focused on international public health. Turkey does not track femicide. The women who shared their stories indicated that the violence began before and continued after they sought a divorce. Emine Dirican lacks personal protection after her husband shot her in the leg, forcing her to quit work and seek a divorce:

“I don’t want to be found dead somewhere or for acid to be thrown at me. What is important to me is that the state protects me while I am alive.”

Underlying the rage and violence is the age-old conflict over the meaning and extent of gender equality and how it can be achieved. Religious, political and secular groups have been fleshing out this issue, resulting in some disturbing and enlightening insights and actions. Setting aside the rhetoric, pontificating and unwillingness to enforce laws are people’s lives. That argument is simple: A mother is killed and a child loses both parents.

In vitro fertilization or artificial insemination has been legally available to only married or cohabitating heterosexual couples in France, but a new bill could expand this reproductive right to single parents and homosexual couples. Gay marriage was legalized in 2013 despite the homophobic rhetoric and propaganda as well as mass violence. With such heinous outrage looming in the public domain, lawmakers have been hesitant to take action. However, President Emmanuel Macron made the expansion of reproductive assistance part of his campaign platform. With Spain and the United Kingdom already making IVF available to all women regardless of marital status or sexual orientation, France may not be too far behind.

Is it too soon for joint custody in Japan?

Japan has traditionally granted legal custody of the child to the mother, but societal and political changes are afoot. Noncustodial fathers have been speaking out, and in one case suing the government, for more legally recognized involvement in their child’s life. Many opponents to such legislative changes point to not only high-profile abuse cases but also a nonexistent support system of child support collection, rehabilitation and child advocacy. This situation stems from the consensual divorce that Japan permits in which 90 percent of couples part ways without litigation and mediation. Before any progress can be made on joint custody, Japan needs to discuss how to restructure — or overhaul — its entire divorce system.

More than 5 million Australians ran out of food last year and most of them were women, Foodbank report reveals

The 2019 Foodbank Hunger Report’s conclusions present a stark and alarming reality for so many vulnerable women in Australia. Around 30 percent avoid a day or more of food a week because of surprise expenditures, undue financial burdens and limited employment opportunities. But this food insecurity in which access to good, healthy food is lacking or nonexistent can last for 12 months or more. Foodbank Australia CEO Brianna Casey had this to say about this growing social crisis:

“We hear so many heart-breaking stories, from mothers skipping meals so their children can eat, to elderly women left on their own feeling isolated because they can’t offer their neighbors or friends so much as a cup of tea or coffee.

“We knew the situation was bad, but this year’s report confirms that it’s getting worse and the impact is skewed towards our most vulnerable women in the community.”

As a single mother, I have purchased a side dish or drank a cup of coffee many times, so my son could benefit from a healthy, substantial meal at a restaurant. I have seen how such deprivation over several years can leave its mark on a woman’s body. A co-worker lost all of her teeth by her 30th birthday because of a poor diet in which she skipped meals for days at a time so her children could eat. And I live in the United States of America, the land of prosperity and opportunity. 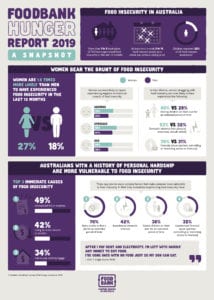 The Little Free Library projected inspired the steady proliferation of mini-pantries in cities and communities throughout the United States. Located primarily on private, but publicly accessible property, these pantries allow individuals to retrieve food anytime without enduring the “shame” of public assistance. Instead, community members donate to more than 670 pantries and accept the bounty left for them. The pantries are the busiest when children are out of school and their parents, particularly single parents, are struggling to find the money and means to feed them.

Single mothers are left out of maternity leave

Told from the perspective of single mothers with young children, this news report examines the stigma and legal barriers that single mothers endure in China. The alienation Zou Xiaoqi, a mother of a 2-year-old boy, experienced from coworkers and community members who simply “didn’t know what to do with me” in no way prepared her for the injustices she suffered from the state. China collects contributions from employers that go toward maternity leave payments and medical subsidies. But to collect this money, the mother must be married, leaving single mothers financially struggling. Zou has refused to allow the government to control her happiness:

“I know this is my right. They cannot say that a woman who gets pregnant must get married or have an abortion.”

Childcare leave has been extended to fathers who are in the military and government services in India. This expansion afforded an additional opportunity for modifications to be made to the regulations surrounding this benefit for single parents. Among them was the removal of the age limit for children with disabilities as a condition for exercising leave. Through these efforts, the Indian government is recognizing the value of its officers in the defense forces and their families.